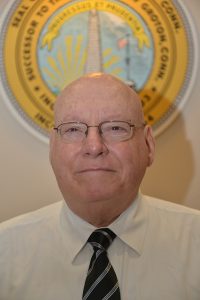 Robert “Bob” Zuliani, a retired accountant, former City Councilor, and a former member of the Board of Education, has begun a new career as a policy maker for the City of Groton’s electric, water, and sewer businesses.

He is now a member of the City of Groton Utilities Commission, which sets policy for Groton Utilities’ three major businesses – electric, water and sewer services. Together their revenues are budgeted for fiscal year 2019 at 70 million dollars.

Zuliani is truly a local. “I never left,” he quips. “I’m home grown. I was educated here, married here, retired here. I lived all my life here in Groton.”

Local also translates to commitment. Zuliani has been active in the Greater Groton Community since his graduation from Bentley College in Waltham, Massachusetts, where he earned a Bachelor of Science degree in accounting.

Early on after his return home from college, he became involved in the community, serving two terms as a City of Groton Councilor from 1975-79.

He noted the Zuliani name was quite recognizable locally, because his father operated an Italian restaurant called Vic’s at the edge of what is now the Groton Shopping Plaza for a decade in the 1940s and 1950s. Zuliani laughed when telling the tale, because he says that he was not sure whether the people were voting for him or his dad, since his father had a respectable reputation in the restaurant business.

“This first local political experience started me out learning about local government,” he explained. “I learned about the relationship between the City Council and the utilities, and then about the City-Town relationship.” He explained that it helped that he was an accountant, as he educated himself about the workings of local government. This was especially relevant in trying to understand the city’s annual request to the Town of Groton for highway and police funding.

Zuliani’s career as an accountant lasted 30 years. He worked 15 years in the public accounting field, and then 15 years in corporate accounting. Then he left his working days behind, retiring at 55 in 2000.

His appointment to the City of Groton Utilities Commission is interesting in that he is a Republican, and City Mayor Keith Hedrick, who chairs the commission, is a Democrat. “I think the mayor was interested in that I had a long career in finance,” Zuliani explained. “I believe the mayor is looking to bring a variety of critical skills, backgrounds and experiences to the Utilities Commission.”

He was a member of the Groton Board of Education from 1995-2003, serving as chairperson of the Board’s Finance Committee.

Zuliani and service extended beyond the local boarders. He was in the U.S. Army from 1966-68, serving in Saigon, Vietnam.

His service to the community also includes serving on the Board of Trustees of the Bill Memorial Library and the Colonel Ledyard Cemetery Association, both in the City of Groton. You guessed it. He serves as treasurer for both groups.

Zuliani also is on the City of Groton Ethics Board and is its sitting chairperson.

Local is again relevant, as he is a parishioner of Sacred Heart Church of Groton.