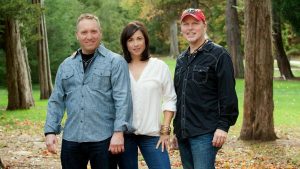 Whiskey, Wine and Coke, an acoustic trio, will be featured in the last City Cabaret 2019 concert of the season.  The concert will held on Sunday, March 10, at 3 p.m.

The trio includes lead singers, Renee and Dave, and guitarist, Dean.  In addition to the Coyote River Band set list, the group does cover songs by The Beatles, Carly Simon, James Taylor, The Eagles, and Etta James. 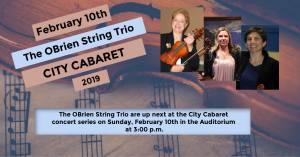 City Cabaret 2019 will feature the OBrien String Trio at its next concert on Sunday, February 10 at 3 p.m..

The OBrien String Trio is a classical string trio, which plays everything from “Bach to Broadway.” The trio consists of Kate O’Brien on the violin, Lydia Leizman on the viola, and Corinne Cunha on the cello. The group will play a variety of music, including classical, and Kate O’Brien’s original arrangements of popular, ethnic and fiddling styles.

The OBrien String Trio concerts are designed for all ages, especially excellent for families, and feature a combination of many styles of music.

Whisky, Wine and Coke will close out the season with a performance on March 10, 2019.

Dessert, coffee and bottle water will be available for purchase from the Fitch High School Alcohol and Drug Free Party Committee. The concerts are free. No alcohol is allowed. The concert info line is (860) 446-4129.