A major rainstorm with high wind gusts will bear down on Connecticut overnight, leading to the distinct possibility of power outages on Christmas morning. None of this is anything we want to hear the day before Christmas, but it is what it is – and the smart thing to do at this point is to be prepared.

Groton Utilities crews will be at the ready and will do their very best to restore power as soon as possible while keeping our employees safe.

To report an outage call Groton Utilities at 860-446-4000. Stay away from any downed wires you may encounter outside your home and on the roads. 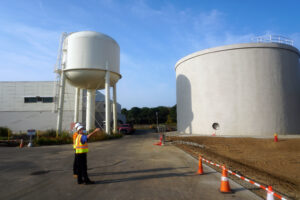 On Monday, November 30th the City of Groton and Groton Utilities, along with the Connecticut Department of Public Health’s (DPH) Drinking Water Section, held a virtual celebration to mark completion of a crucial phase of Groton Utilities’ water treatment plant construction project. With completion of phase three (out of five) of the plant rollout, water is now being clarified and filtered within the new water treatment plant.

The new filtration plant replaces a plant that was originally constructed in 1938.

“It’s quite an accomplishment,” said Lori Mathieu, CT DPH Environmental Health and Drinking Water Branch Chief. “We’re so pleased to be able to celebrate this today. Especially during this time of COVID…. this is an extraordinary project (to complete) during normal times, but it’s incredibly extraordinary during the time of COVID. You’ve done such a great job. We are so very proud to work with you on this project and be part of it.”

According to Cam Walden, Supervising Sanitary Engineer from DPH, this project was considered the state’s number one priority for its Drinking Water State Revolving Fund (DWSRF) program dating back the project’s inception. The $54 million project was the largest project that has been funded through the DWSRF program and the first project to receive state grant funds from the DPH’s Public Water System Improvement Program ($15 million). 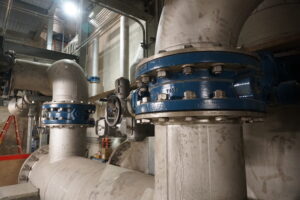 “The project will greatly strengthen the drinking water infrastructure in this region of Connecticut for the next several decades,” said Walden. “My hat goes off to all of the operators and staff at Groton Utilities and all of the management as well. They had to keep the existing plant operating safely during construction.”

As part of the celebration Rick Stevens, Groton Utilities Manager – Water Division, narrated a pre-recorded video virtual tour of the new plant as water was directed through the new plant for the first time.

City of Groton Mayor Keith Hedrick expressed gratitude to all who participated in the project, but specifically pointed out the Groton Utilities staff.

“The employees are the men and women who started the project, and they’re going to continue it. And we’re going to have a state-of-the-art facility because of them that will meet water standards now and into the future.”

Construction of the new water treatment plant began in September of 2017. The main DAF (Dissolved Air Flotation) building is approximately 20,000 square feet and is where the primary filtration functions occur. The new filtration plant can process up to 12 million gallons of water per day, far more than the maximum of the previous plant. In addition, two new elevated water storage tanks were constructed, both of which can hold up to 1 million gallons of water in reserve. 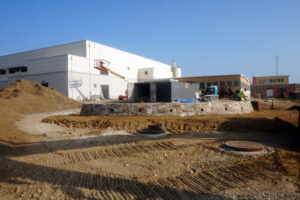 The construction project is expected to be fully complete in the spring of 2021.