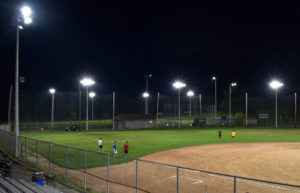 When you drive by Washington Park in the City of Groton at night you may notice that the park seems to be lit up as bright as day. This is not your imagination – it is the result of brand new LED lights having been installed in the park.

Earthlight Solar and Energy Solutions were contracted to upgrade all lighting for the athletics fields at Washington Park in the spring of 2021 and have completed the renovations as of early October. Nearly 100 LED lights and accompanying fixtures were installed on existing poles around fields 1 and 3 (softball and baseball fields). Additional new lighting was installed for the basketball courts, parking lot and flag pole. While the lights are bright, they are appropriately directional and therefore the project is dark sky compliant, avoiding nighttime light pollution.

The project was done in cooperation with the City of Groton Parks and Recreation Department and Groton Utilities Key Accounts division, with Energy Engineer Hollis McKee taking the lead of planning the project and acquiring the funding.

“The lights in Washington Park needed to be replaced because they were 30 years old, and some of them were no longer operating,” said McKee, “Because they were HID  (High-Intensity Discharge) model light bulbs they consumed a ton of electricity. HIDs over time give out less light as well, making them less effective. So new lights are better and will save the city a lot of money on their electric bill.”

Funding for the lighting project was provided through the Regional Greenhouse Gas Initiative (RGGI) program via the Connecticut Municipal Electrical Energy Cooperative (CMEEC). RGGI is a cooperative effort among regional states including all of New England, Delaware, Maryland and New York to cap and reduce CO2 emissions. RGGI is the nation’s first mandatory, market-based CO2 emissions reduction program.

The total cost of the project was $226,293.30. Due to the upgrade to cost-efficient LED Lighting from HID-style lighting the city with see savings of approximately 56,318 kWh a year. This equates to an expected monetary savings of over $12,380 a year, while also producing less greenhouse gases and lowering our carbon footprint.

According to Earthlight Solar and Energy Solutions this project is the equivalent to: 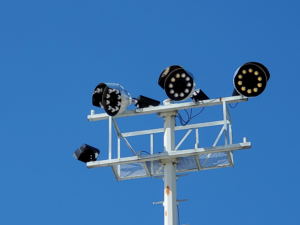 “The lights in the park were replaced with LED lights as they have become the standard technology in this field due to the cost savings, smaller carbon footprint and the long life of the bulbs,” said McKee, “The City of Groton is looking to reduce its carbon footprint and be as green as possible. The LEDs also give out brighter light – more lumens – and of course use less energy. It’s a win for the city the whole way around.”

McKee added that the lights are expected to last 15 years, but because they will not be on all the time, or even most nights, that they will last even longer.

There was an interesting note regarding the timing of the project. All but one pole had all of its lights replaced in early September, but the project had to wait until October to be fully completed. Why you ask? It seems an Osprey and its new family had taken up residence at the very top of the lighting pole above leftfield of the baseball field, so Earthlight had to wait until they vacated. Once the nest was no longer occupied Earthlight came back and finished their work.

And a perch was installed for next year. Hope they don’t mind cost-efficient LED lighting. 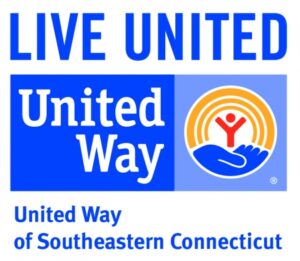 Groton Utilities is sponsoring a mobile food pantry food distribution event for this Friday, October 22nd, at St. John’s Church at 346 Shennecossett Road in Groton, CT. The event will run from 12:30 to 2:30 pm. Families will receive a box containing fresh produce, protein, nonperishables, and more. No registration required. Families are served on a first come-first served basis so arrive as early as possible. 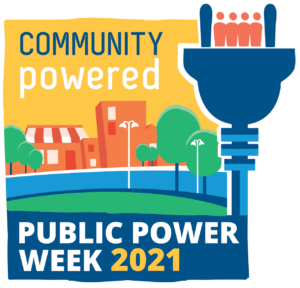 This year, we are highlighting the people behind public power. Our dedicated staff from various departments care about helping customers receive the most optimal services, at a low cost. To mark Public Power Week Groton Utilities offers a few tips on how to save energy and money in your home, while caring for the environment and the community we live in:

“We know that using energy wisely to lower monthly electric bills is important to Groton Utilities and Bozrah Light and Power residents,” said Hollis McKee, Energy Engineer at Groton Utilities, “While we are sharing these tips during Public Power Week, we hope our community will keep an eye on energy efficiency all year round.”

Groton Utilities offers a variety of programs to help you use energy wisely. GU’s Home Energy Savings Program, subsidized in part by a State of Connecticut grant, provides a comprehensive in-home energy assessment service for your dwelling. Additionally, Groton Utilities offers a comprehensive slate of rebates in our Rebate Center that will help you purchase and/or install the proper equipment to help you save energy and money for many years ahead.

We have reached a sodium level of 32 mg/L in the drinking water from the Water Treatment Plant this summer. The notification level for sodium is 28 mg/L in tap water. This is not a violation and is perfectly safe for most people, but requires us to notify our customers that the level is above 28 mg/L. If you have been placed on a sodium-restricted diet, please inform your physician that our water contains 32 mg/L of sodium.

Sodium is an element that is naturally occurring and is essential for life.  Sodium is naturally present in our reservoirs, and in some of our reservoirs it is at a higher level than others, possibly due to stormwater runoff from the roads.  At various times, ranging from the spring to the fall, it is advantageous to blend water from one of our reservoirs into our main reservoir to improve certain aspects of the water quality.  Unfortunately, that reservoir is one of the ones which has a higher sodium content from road salting, and this will sometimes cause our tap water to have sodium in excess of the 28 mg/L notification level (our maximum level this summer is 32 mg/L).  As required, we publish a notice in our billing statements to let our customers know this.  For most of our customers, this will not be an issue, but for customers who have been put on a very restrictive diet (less than 500 mg of sodium per day) this may be something they will want to discuss with their doctor.  To put things in perspective, 32 mg/L of sodium is equal to 8 mg of sodium in an 8 ounce glass of water; in comparison, an 8 ounce glass of 1 % milk contains 104 mg of sodium.  So if you have any concerns about sodium in drinking water please consult your physician, but for most people on a normal (i.e., non-sodium restricted) diet, Groton Utilities water would not be of concern.