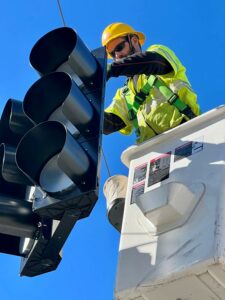 This past week Groton Utilities completed an upgrade of the traffic lights at the intersection of Thames Street and Smith Street. This set of lights is the third in a series of three traffic light upgrades performed on Thames Street. Previously traffics lights had been upgraded at Thames and School Street as well as Thames and Broad Street, all within the last nine months.

The new lights are a significant upgrade as they are larger and use LED bulbs. The previous traffic lights, installed in 1988, were eight inches in diameter and used incandescent light bulbs. The new ones are 12 inches in diameter. This makes the lights easier to see and reduces electrical costs by roughly 40%.

The new traffic lights also incorporate a UPS (uninterrupted power supply) system which will provide up to eight hours of on-battery power in case of power outage. In doing so the new lights can remain functional during a power outage and avoid the necessity for portable stop signs or police officers to direct traffic. Lastly, the new traffic lights systems utilize a car video detection system which detects cars in order to safely change the light to green when a car is present. This new  system is more sensitive than the old, under the pavement sensor system and should help cars get the green light they are all waiting for faster. 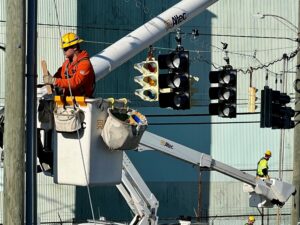