The City of Groton and Groton Utilities are happy to announce the concert schedule for the 2019-2020 City Cabaret concert series.

In a change from previous years we are pleased to announce that we have four concerts on the schedule, instead of the traditional three. The “bonus” concert is a special holiday concert with the very popular regional band The Cartells, to be held on Sunday December 15th at 3:00 p.m. at the City of Groton Municipal Building. The Cartells will be bringing their usual high level of musicianship and energetic stage show into the holiday season, offering up an array of holiday favorites for all to enjoy.

All concerts are held on Sundays and are performed at the City of Groton Municipal Building Auditorium. Concerts begin at 3:00 p.m. and end at roughly 5:00 p.m.

The full schedule of concerts is as follows:

Clan O’Cleary’s music is firmly rooted in the sounds and the instruments of Ireland. Beautifully harmonious in both voices and instruments, from the soft mysticism of New Age Celtic to the raucous songs of the Irish bar band, this is Irish music played with gusto and grace, as it should be.

This is the trimmed down and mellowed up version of the popular full band Azalea Drive. Kym and Ron use their magical musical chemistry to bewitch audiences with the best of the last several decades, including Hall and Oates, Stevie Wonder, Bruno Mars and much more.

Whiskey Wine and Coke are a musical trio with a male and female lead singer and acoustic guitarist. The band skillfully covers songs from the 60’s, 70’s, 80’s and 90’s and modern country. Through the intimacy of a trio, they engage their audience to experience musical nostalgia while dancing and singing along to timeless favorites! 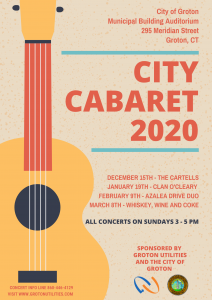