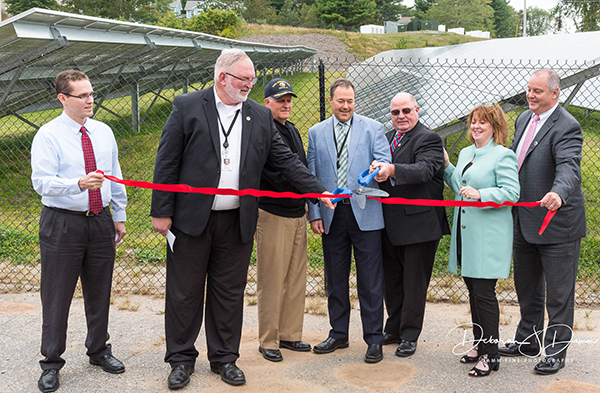 From the sounds of the national anthem sung by the Fitch High School chamber choir to the ceremonial cutting of the red ribbon, the celebration of the completion of the three solar farms in the Greater Groton Community was a resounding success.

The ceremony at Polaris Park, the site of the largest of the solar farm sites, was marked by a positive response of representatives of the community team that constructed these renewable energy facilities.

The private and public community partnership includes a broad spectrum of interests, including the U. S. Naval Submarine Base, Balfour Beatty Communities, Groton Utilities, the City of Groton, the Town of Groton, the Connecticut Municipal Electric Energy Cooperative, and Brightfields.

“Today, our Navy energy programs aim to reduce the Navy’s consumption of energy, decrease its reliance on foreign sources of oil, and significantly increase its use of alternative energy,” he emphasized.

Other speakers from the community partnership, including City of Groton Mayor Keith Hedrick, Mark Lavin from Balfour Beatty Communities, and Ronald A. Gaudet, Groton Utilities Director, all emphasized the major energy savings, the importance of the private-community partnership and the positive impact of this green energy source to the Groton’s energy supply mix. 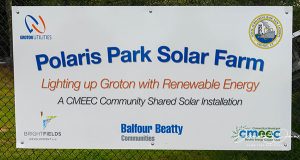 The site also contains electric storage capacity. When this storage is used in conjunction with the solar, it provides critical resiliency during the duration of the power outages.

The storage is large enough to extend electric supply for the equivalent of 100 homes for a 24-hour period.