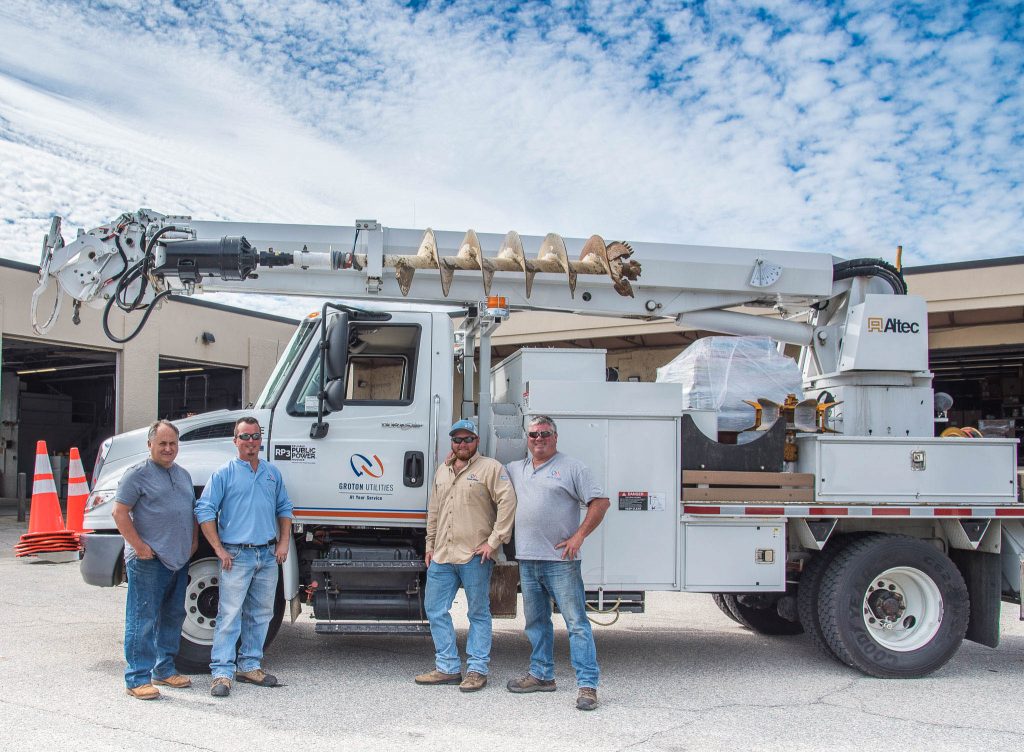 (Left to Right) Brian Roche, Keith Lemoine, Matthew Cook and Jeffrey Lyon with the truck headed to the Virgin Islands

Groton Utilities is sending electric crews to St. Thomas in the Virgin Islands to help with the restoration of electrical services to the storm torn Caribbean island.

The first crew will include three electric linemen and a manager for about three weeks.  Other crews will be rotating out every few weeks for the next three months.  Two vehicles, one digger truck and one pickup truck, plus a pole carrier, will be used by the crews during their restoration work.

The first crew members traveling to St. Thomas are linemen Jeffrey Lyon, Matthew Cook and Keith Lemoine.  Brian Roche will manage the crew.  They will leave Groton on Sunday morning and travel to Fort Lauderdale, Florida, where the vehicles will be placed on barges for transporting to St. Thomas.  Crews will arrive in St. Thomas on October 11.

Groton Utilities electric crews are one of two Connecticut public power systems to commit to the St. Thomas electric restoration effort.  Norwich Public Utilities will also be involved in the restoration efforts. Crews from other municipal electric utilities in New England will join Groton Utilities in the effort, which is being coordinated by the New England Public Power Association (NEPPA), the organization representing municipally owned and operated electric companies in New England.

Groton Utilities is one of the nation’s more than 2,000 public power utilities, which are nationally organized as the American Public Power Association (APPA).  Groton Utilities recently earned a Reliable Public Power RP3 designation from APPA for providing its consumers with the highest degree of reliable and safe electric service.

Groton Utilities has been a municipally owned and operated electric utility since 1904 and serves a population of more than 35,000 in the greater Groton area, including Pfizer, Electric Boat and the U. S. Naval Submarine Base.

The American Public Power Association (APPA) is the national organization representing the nation’s more than 2,000 community- and state-owned electric utilities.