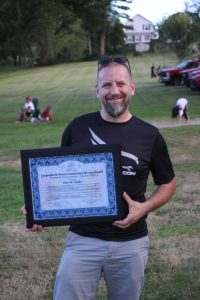 Martin Cloudas is the recipient of the 2018 Jacqueline B. Nixon Community Service Award for his many years of “Giving Back to the Community”. The award was presented for the fifteenth time at the annual City of Groton Day celebration on August 3rd.

The award recognizes Cloudas for his outstanding efforts over the years, especially for his roles as mentor, supporter, teacher, and counselor to the Fitch Senior High School robotics team, Team 2168:  the Aluminum Falcons.

Groton Utilities is pleased to present this award to this deserving citizen for giving back to our community selflessly, sincerely, willingly and with great pride.

Since 2015, his volunteer efforts, including his leadership position as president of the team’s booster organization, enhanced the business side of the team.  The new financial structure improved fund raising, giving the team the ability to attend more competitions.

The robotics team credits Cloudas as one of the largest contributors in spreading science, technology, engineering, and mathematics throughout the Groton Community.

“Martin has become a father away from home for the entire team,” the team members emphasized in its nominating application.  “His ability to communicate with students has produced a trust with students, inspiring them to fulfill themselves and become better people,” team states.