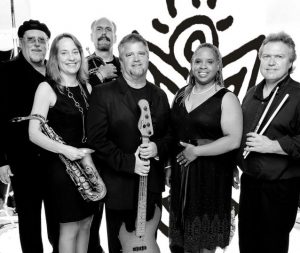 The rockin’ and funky sounds of the band Mass-Conn Fusion will be featured this week at Concerts in the Park 2018 on Friday June 29 at 6:30 p.m. at Washington Park in the City of Groton. Made up of musicians from Connecticut and Massachusetts, the band has an extensive repertoire featuring Motown, R&B and Funk along with hits of the 60’s right up to the present.

All concerts are free.

Groton Utilities and the City of Groton Parks and Recreation Department co-sponsor and co-produce the concert series.

For concert information or cancellation notices, call 860-446-4129, the concert hotline. Food is available on site. The Groton Little League operates the concession stand.