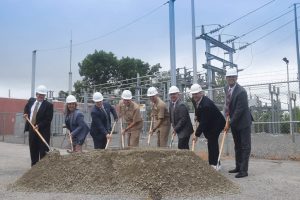 The ground breaking was held near the installation’s sub-station interface with the community power grid.

The new generating capabilities of the fuel cell park advance the base’s energy reliability and energy security, especially as the base supports fifteen 15 nuclear-power fast-attack submarines which have their reactors shut down while in port.

Power from the fuel cell park not used by the base will supply the local power grid as well.

“Since SUBASE’s establishment as our Nation’s first permanent, continental Submarine base in 1916, our mission has been simple and straight forward: to deploy combat-ready submarines and crews, and to train a corps of professional submariners,” said Capt. Paul Whitescarver, SUBASE commanding officer. “Critical to ensuring SUBASE’s mission success is energy, and the fuel cell park is a win for all involved.”

Possible thru Enhanced Use Leasing

Whitescarver highlighted that the project is possible through the Navy’s “Enhanced Use Leasing” program.

Enhanced Use Leasing (EUL) opportunities provide Navy installations with alternatives to traditional approaches of acquiring, constructing, or upgrading facilities, and enables installations to leverage assets or property that are underutilized but not excess to the Navy’s needs. The small parcel of land adjacent to the SUBASE power sub-station to be used for the fuel cell park is such an example.

CMEEC was selected as the most qualified developer through a competitive solicitation process. Headquartered in Norwich, Connecticut, CMEEC is a public power entity that provides electric services to several municipal utilities and participating wholesale customers.

In exchange for use of the leased property to construct the fuel cell park, CMEEC will provide the Navy and SUBASE consideration in the form of “in-kind services,” such as power and equipment upgrades.

“Working collaboratively with the Navy, this project is an excellent model of public-private partnerships committed to do what is right for all the right reasons” said Drew Rankin, Chief Executive Officer of CMEEC.

“Not only will this [fuel cell park] provide predictable and resilient baseload power, it does so with FuelCell Energy’s 50 years’ worth of research and development of ultraclean renewable power generation solutions,” said Tony Rauseo, Vice President and Chief Operating Officer of FuelCell Energy. Rauseo noted that the fuel cells will use chemistry, not combustion, to convert natural gas into electricity, thus eliminating the creation of dirty pollutants such as “NOx and SOx, the leading causes of air pollution, smog and acid rain.”

Initial construction of the fuel cell park will begin in September.

Once on line, the fuel cell generation capability will serve as another milestone as SUBASE continues to pursue the development of a micro-grid for the base.

“A SUBASE micro-grid will transform our existing electrical system into a more intelligent, flexible, and robust system,” said Whitescarver.

A future micro-grid at the base will enhance power diversification, physical and energy security, and community collaboration, according to Whitescarver.

Through such a micro-grid, SUBASE will benefit not only from automated data gathering and precise peak demand control, but also from the ability to seamlessly disconnect from the utility grid and efficiently dispatch power generation to mission critical loads.

The Navy’s focus on energy security, energy efficiency, and energy sustainability and reliability is not new, explained Whitescarver at the event. Starting in 2009 with the Secretary of the Navy’s Great Green Fleet initiative, the Navy’s energy programs aim to reduce the Navy’s consumption of energy, decrease its reliance on foreign sources of oil, and significantly increase its use of alternative energy.

“Energy expenses are the single largest cost for Navy installations, reflecting about 28 percent of Navy’s shore budget,” said Whitescarver. “Innovative projects and cost savings created ashore free up dollars that can be used in the fleet.”

For Rankin, the efficiencies and impact that the fuel cell park on SUBASE will provide can be attributed to the culmination of a group effort by many individuals over many years.

“The Navy, Fuel Cell Energy, the State of Connecticut, and the CMEEC Board and employees, all focused on the one objective, how to enhance the SUBASE military value and preparedness, and to figure out how to do it in the most mutually beneficial way for all parties,” said Rankin. “We figured it out; we worked collaboratively; we made it happen; and the entire CMEEC team is proud to be part of this noble group.”