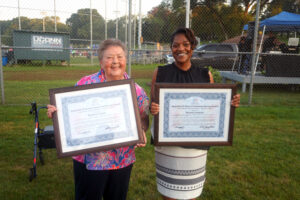 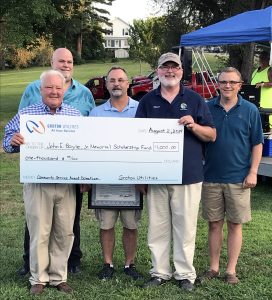 At “City of Groton Day” this past Friday Groton Utilities presented the 2019 Jacqueline B. Nixon Community Service Award to Timothy LeHouillier for his volunteer contributions to the Greater Groton Community.

Tim was given the award for his outstanding efforts over the years as a volunteer at the Center Groton Volunteer Fire Department as well for a noteworthy commitment to assisting those in need in his neighborhood. Tim loves to help people, works hard and always tries to lift the spirits of those around him.

Tim is of great help to the elderly in his neighborhood, assisting in cleaning up yards, planting gardens, splitting wood and plowing snow from their driveways, free of charge. Tim will often plow driveways at 5:00 a.m. so that people can get out of their driveways. He also volunteers at the Center Groton Volunteer Fire Department while also serving on its board. Additionally, he was instrumental in painting the firehouse in order to save money as well as assist the other volunteers.

In Tim’s honor Groton Utilities donated $1,000 to the John E. Boyle Jr. Memorial Scholarship Fund. Representing the Scholarship Fund were Scott Boyle and Tod Evers, who received the check at the ceremony. City of Groton Mayor Keith Hedrick and Groton Utilities Manager of Communications and Community Outreach Dan Bouges hosted the ceremony and gave out the community service award and charity donation.

The Jacqueline B. Nixon Community Service Award is given out annually by Groton Utilities at City of Groton Day to honor a member of the community who has contributed his or her time, energy and resources to make the community a better place in which to live and work.

The award is named in honor of Jacqueline B. Nixon to commemorate her service to the community she loved so much. Jackie operated a food pantry in her residence for 24 years, distributing food to those in need. The winner of this award is someone who should contribute to the community and should be someone who others would describe as generous, committed, caring, and most of all someone who performs a “service” for the community. Tim LeHouillier embodies all of these attributes and therefore Groton Utilities is proud and honored to present him with this award as well contribute to his charity of choice.

Marcia R. Gipstein is the recipient of the 2017 Jacqueline B. Nixon Community Service Award for her many years of “Giving Back to the Community”.  The award was presented at the annual City of Groton Day celebration on August 4.

A check for $1,000 was presented to the Ledge Light Foundation Inc. in her honor. The charitable donation from Groton Utilities is the symbol of the award. 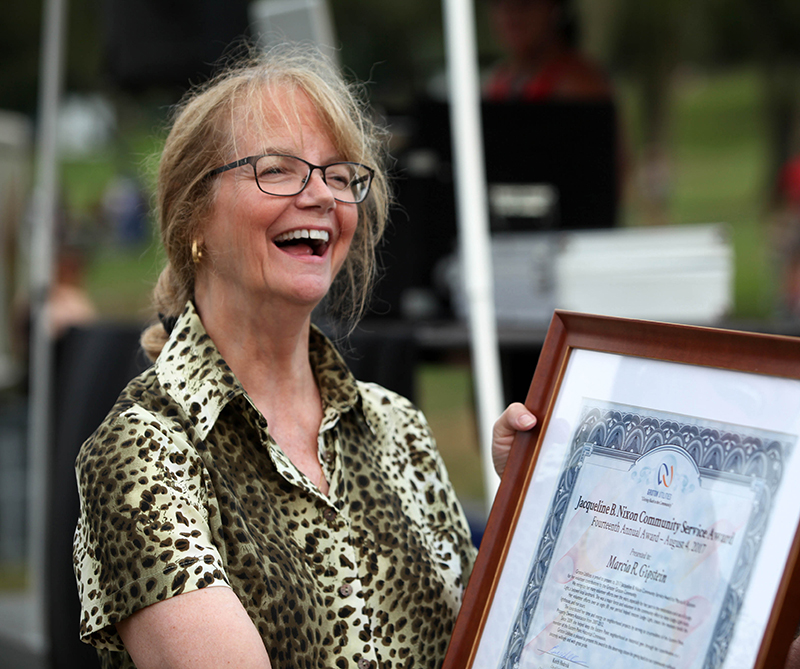 From 2008 to the present, Gipstein has been a major force and volunteer in the community effort to keep Ledge Light local. In nominating his wife for the award, Todd Gipstein, who is President of the Ledge Light Foundation, said that, while she is a transplant to Groton, “Marcia has embraced the community, helped Eastern Point, and been one of the driving forces behind the restoration and use of Ledge Light, a beloved local landmark.”

“For eight (8) years, she has often put in 40-hours a week (all volunteer) helping restore the light, create the museum inside the lighthouse, and run tours,” he explained.

Todd says that Marcia was the driving force behind the lighthouse’s 2009 Centennial Gala.  That event drew 220 people and raised enough money to commission important studies, start the museum and allow the Foundation to begin serous restoration work.

In 2009, Marcia was the driving force behind the lighthouse’s Centennial gala, which drew 220 people and raised enough money to commission important studies to start the museum and begin serious restoration work. 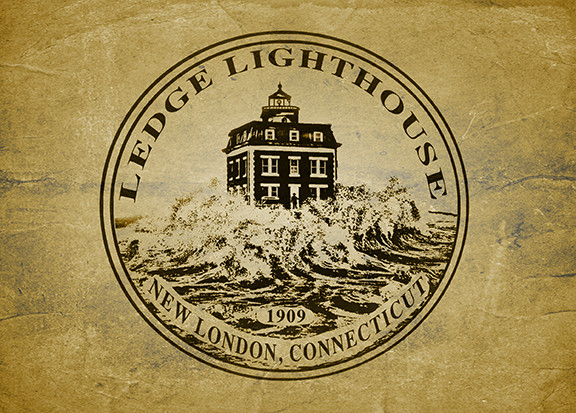 For the past nine (9) years, she has been on the Ledge Light Foundation Board of Directors, serving as its treasurer.  Her involvement has also included all the preservation work on the light, writing grants, creating the gift shop. She has also been in charge of tour guides, tour scheduling and been a guide herself.

Marcia co-wrote the application for ownership of the light when the federal government offered it to a non-profit.  This was a joint effort with the New London Maritime Society to keep Ledge Light local.  The result was successful.