Timothy Jackson was awarded the Groton Utilities Jacqueline B. Nixon Community Service Award during a ceremony at Groton City Day on Friday, August 5th in Washington Park. The award is given out annually to a member of the City of Groton community who exemplifies GU’s slogan of “Giving Back to the Community”. 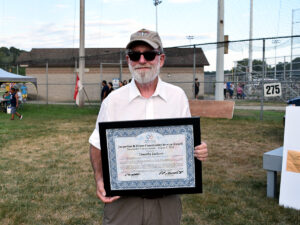 As part of winning this honor Groton Utilities presented a check for $1,000 to the Bill Memorial Library in the name of Timothy Jackson at his request.

Tim has offered his time and building skills to a number of local non-profits over many years, using his repair and construction skills at Bill Memorial Library extensively. Among the tasks he has performed, Tim overhauled their story-time benches, reworked and painted outdoor benches, posted a handicapped parking sign and repainted the parking spot, reinforced the handicapped ramp, sanded and repainted railings at the front entrance, built shadow boxes around artwork and designed a custom doorstop for the heavy, 1890s door.

Tim has replaced countless light bulbs, installed numerous curtains and blinds, helped to carry many pieces of large furniture, and caulked leaks all over the library. He has saved the library time and money doing the work himself instead of the library hiring repair companies, movers, painters and more – all while sharing his wonderful sense of humor and boundless energy.

Tim has been an active member of GOSA (Groton Open Space Association) for many years. He received GOSA’s Spotted Salamander Award, its highest honor, for his dedicated stewardship services to GOSA.

Groton Utilities is pleased to present this award to Mr. Jackson for giving back to our community selflessly, sincerely, willingly and with great pride. Tim was nominated for this award by Bill Memorial Library Director Wendy Connal.