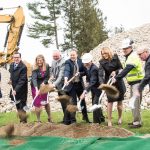 “Water is a matter of public trust,” so declared Governor Malloy.  Groton Utilities and its local, state and federal partners celebrated that trust at a groundbreaking enactment ceremony in the shadow of its 80-year-old Water Treatment Plant on the last day of a traditional, New England April.

All of the speakers from Gov. Dannell Malloy to Connecticut Department of Public Health, Commissioner Raul Pino, to Environmental Protection Agency Region 1 Administrator, Alexandra Dapolito Dunn, to City of Groton Mayor Keith Hedrick to Director of Utilities Ron Gaudet, emphasized what that public trust means to its citizens and stakeholders is in the form of resiliency.

The ceremony was a celebration of the construction of the renovation and improvement to Groton Utilities Water Treatment Facility.  The $54 million project is actually already underway.  R. H. White Construction Co., the low bidder, is the general contractor for the project.

The speakers stated that they are supporting that public trust with their financial commitments through low cost loans and grants.  They emphasized a commitment to improving water quality through modern treatment processes.

Part of the state and federal commitments requires Groton Utilities to interconnect with other water suppliers in the Southeastern Connecticut Region.  Officials emphasized the importance of this relationship, as they are all caretakers of water being a public trust.  Groton Utilities presently has interconnections with the Towns of Montville and Ledyard plus the Aquarion Water Company’s, Mystic Division.  Future interconnections are under study and consideration. 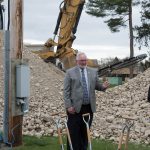 The new Water Treatment Plant is significant in its role as an economic development catylist not only for the Greater Groton community, but also for the Southeastern Connecticut Region.

The program ended with the guest speakers and officials taking to the shovels at Groton Utilities’ Julio H. Leandri Operation Center and tossing soil from the site airward, symbolizing the official “start” of the project.

The architect designed the project to meet emerging and future standards for water quality, enhance fire protection, and provide advanced technology and process control, allowing Groton Utilities to continue its tradition of providing the highest quality water to its valued customers, local and regional.

Groton Utilities Water Division serves some 6,500 customers in the City of Groton, the Town of Groton, Noank, Groton Long Point, the Mohegan Tribal Authority, the Towns of Montville and Ledyard, and the Aquarion Water Company’s Mystic Division.

It was noted that all of this work could not have been accomplished without the efforts and dedication of past and present Groton Utilities’ employees.