After years of planning and over four years of construction, Groton Utilities put the final touches on its Water Treatment Plant project with a Ribbon Cutting Ceremony on Friday, June 10th. The ceremony, held in the shadows of the new water treatment plant and water storage tanks, began at 11:00 am with speeches by Connecticut Department of Public Health (DPH) officials, City of Groton officials and representatives from the engineering and construction firms involved in the project, and culminated with a ribbon cutting in front of the new facility. 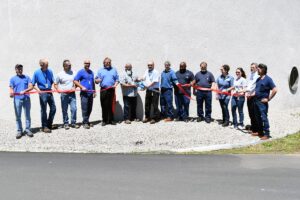 Ray Valentini and Mike Weber and the rest of the water treatment plant crew cut the ribbon.

The ceremony was attended by a large number of Groton Utilities and City employees. Additionally, many local companies sent a contingent, including the US Navy, Pfizer, Fairview Odd Fellows Home and Riverfront Children’s Center, amongst others. 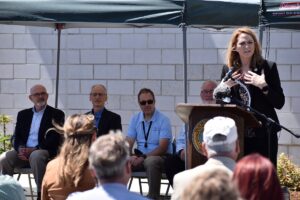